Home/Articles/Autism and Asperger’s Syndrome
­
Previous Next

Independent Speech and Language therapist, Jacqui Wright, has over 22 years experience in South Africa, the U.S.A. and the UK. She is author of ‘Cracking the Literacy Puzzle’, RCSLT Bulletin, March 2006. Here, Jacqui from Childhood Communication Consultancy, based in Carlton, discusses Autism and Asperger’s Syndrome.
Childhood Communication Consultancy (CCC) specialises in assessing and treating children ages 0-19 years old with speech, language, listening, literacy, learning and social communication difficulties. The aim of the assessment is to discover where the breakdown is occurring, to what extent: mild-moderate-severe, to treat this and also advise on strategies to support the child. In the last couple of articles, we reviewed the processes that occur for effective communication and various disorders in the processing model: 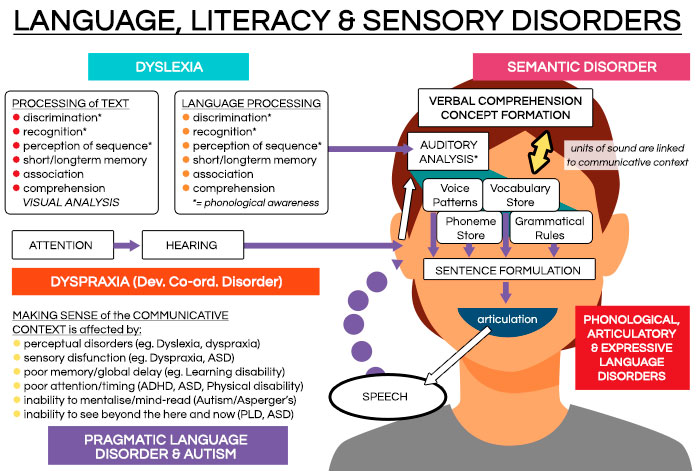 There is an overlap of difficulties between the disorders: ADHD (attention deficit hyperactivity disorder), language and semantic disorders, dyslexia, dyspraxia, pragmatic language disorder (how language is used in context), autistic spectrum disorders and Asperger’s syndrome.

Autistic spectrum disorders and Asperger’s syndrome are characterised by a triad of impairments:

Asperger’s syndrome has been viewed as a less severe form of Autism on the Austistic spectrum continuum, and more recently as a separate condition in its own right. However, there are similarities and overlap between both.

The nature of the Autistic spectrum continuum including Asperger’s syndrome means that children can range from requiring specialist care and provision to being successful in mainstream education, and in later adult life. This highlights the importance of individual assessment and intervention planning; not making assumptions or generalisations about individuals’ behaviours, skills and future prognoses, if they receive this diagnosis.

The key issues affecting children with these diagnoses are:

If you would like to know more about Autism and Asperger’s syndrome relating to your child or any aspect of communication, please contact Jacqui. There is a talk at Jacqui’s practice on Dyspraxia on 6th October and Dyslexia on 13th October for parents and professionals, please refer to OVL diary dates. Jacqui is an Authorised Provider of The Listening Program www.thelisteningprogram.com and she is trained in Talk Tools www.talktools.net In the next OVL , Jacqui will further discuss strategies to support children with Autism and Asperger’s syndrome.